‘This morning my friend and fellow syndicate O.B. sent me the latest gazette post along with not-so-new info for which I’ve been kindly asked to write something about.

It took one look to cough and splutter my early morning tea all over my desktop. 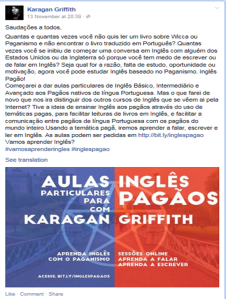 I nearly popped my hernia laughing.  I mean…what was Karagan smoking when he got hit by this monumental brain spark?

“English Classes for pagans: learn Paganism while you learn to write and speak English”.

Greetings to all, how many times you wanted to read a book on Wicca or paganism but could not find it translated into Portuguese? How many times have you felt inhibited to start a conversation in English with someone from the United States or England just because you’re afraid to write or speak in English? Whatever the reason, lack of study, opportunity or motivation, you can now study English based in paganism. Pagan English !
I give private lessons in basic English, intermediate and advanced to the Pagan natives of Portuguese language. What’s entirely new and different from other English courses out there on the Internet? My idea is to teach English to Pagans through the use of pagan themes to facilitate the reading of books in English and  communication between Portuguese-speaking Pagans with Pagans all over the world. Using the pagan-themed programme, we learn to speak, write and read in English. Lessons can be requested at http://bit.ly/inglespagao Let’s learn English?

Isn’t it through ‘education’ that Spanish and Portuguese monks evangelised to the ‘savages’ of the Americas and Africa replacing native languages with their own? Who does Karagan think he is – St. Ignacio de la Loyola?

Why would anyone want to learn English second hand from a non native speaker who speaks my same language and with whom I will likely end up speaking of paganism in Portuguese anyway?

It would have made sense if it had been Jihmal.

Honestly! Why not just say you need an excuse to feed your obsession to talk about all things pagan all day long and get paid for it. Say what we all know already: “I want to be a pagan celebrity in Portugal like Farrar is in Ireland and have lots and lots of covens all of from my line, so I can become the next Queen of the Witches and Jihmal my spouse, the King”.

Through a Jungian Lens